Cretaion of a sea monster necklace

Deep down, a silvery sea monster lurks, ready to stretch its arms towards the surface in order to tear down unsuspecting sea folk into a watery and violent grave. It was this monster which I set out to create, when Nina Hald, author of several jewellery-related books and curator of even more jewellery exhibitions, invited me to participate in the exhibition “Jewels of the Sea” at the nautical museum “Fjord og Bælt”. However, in the beginning, I only knew, that I wanted to work with the octopus because I am in love with the sinuous curls which its arms can create.

We were 40 handpicked jewellers who were invited to create “A piece of jewellery inspired by a sea creature and featuring either a pearl, amber or coral as the main gem”. What an honour! My very first exhibition! I felt excited, humbled and freaked out at the same time and was determined reward Nina Hald’s trust in my abilities. So… noooo pressure! 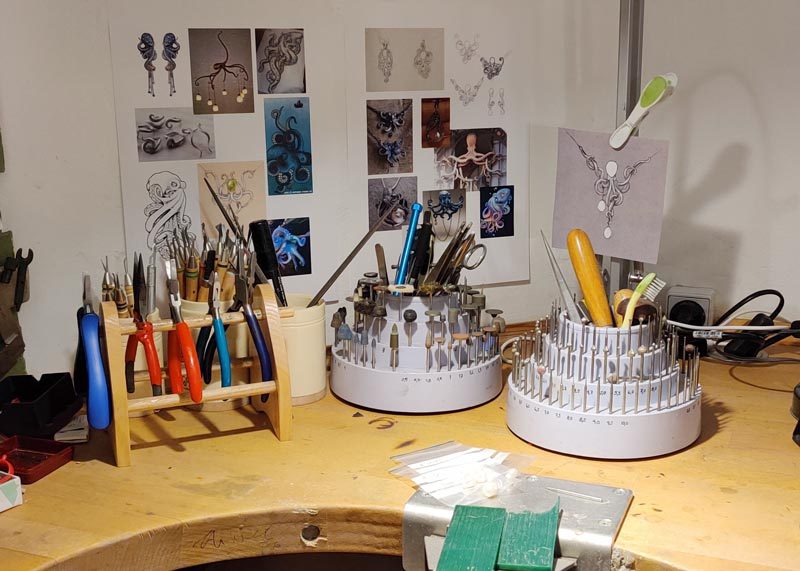 I got the invitation in the summer 2019 and the deadline for handing in pictures of the finished piece was in February. Lots of time one would think, but no matter how much I worked on the design, it just didn’t work. I had looked at masses of pictures of octopi and jewellery depicting a squid, and the ones which sort of “did it” for me I collected in a collage, which I hung on the wall next to my wax working station. However, it wasn’t until the idea of the octopus holding itself onto the chain of the necklace struck me, that I finally had a breakthrough. By then, I was only a few days away from closing down for Christmas! 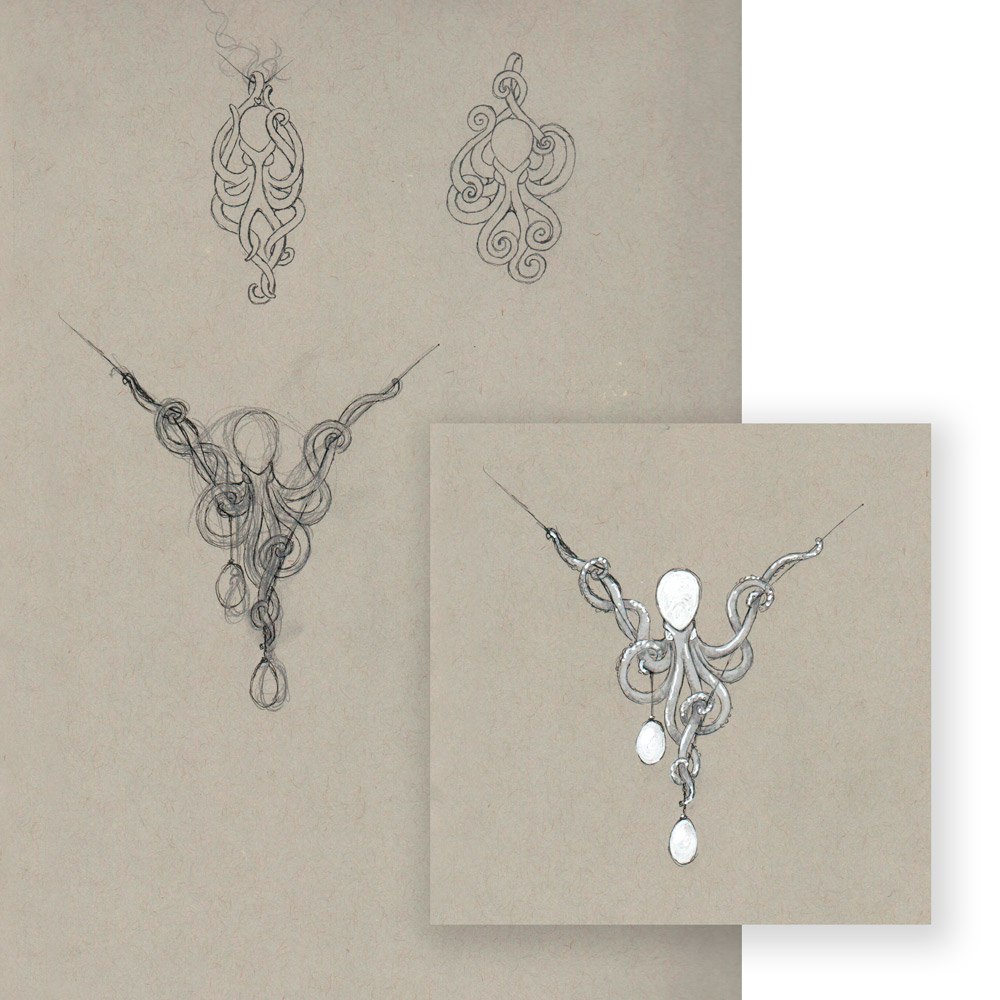 Frantically I started working with the wax and had carved a crude version before going on a much deserved Christmas vacation. Back again, many more hours of wax carving awaited me before I felt confident enough in my design to send it off to the caster. At this stage, I knew that the shape wasn’t completely finished, but since wax is a bit brittle and breaks easily – especially long, sinuous arms such as the ones of my octopus, I had to throw in the towel at some point and just await finishing off the piece when it was a bit more sturdy because it was now made of metal.
What came back was large, heavy and felt clumsy – in spite of me having done my best to slim down the design. So, even more hours of removing and shaping ensued before I was ready to have a mold made of the original, smooth Kraken. Once the mold was made and I could create a wax copy of it, I set out to adorn it with its suction cups. You might ask, why I didn’t do that on the original, carved wax model. However, as I just described: I knew beforehand, that I would not be satisfied by the cast of the original, and if I had placed the suction cups on the original wax, I would just have ended up removing them again in order to shape the creature perfectly. 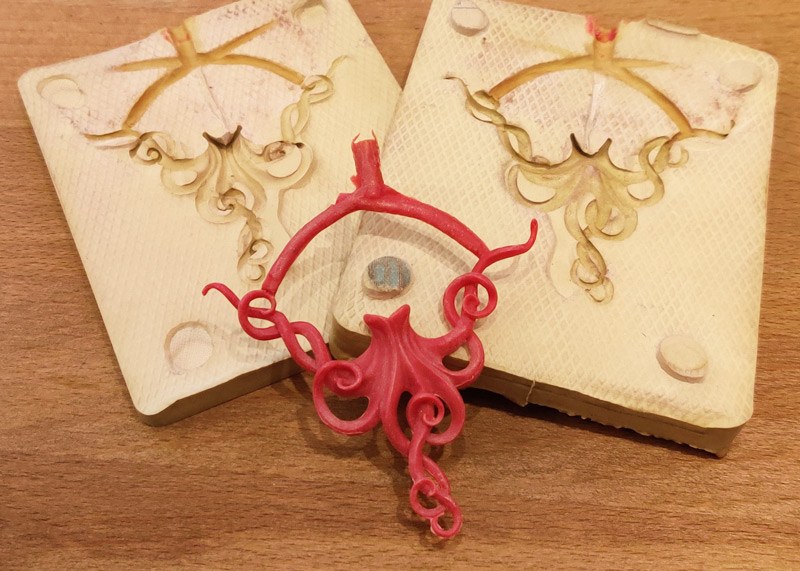 Back from the caster I had yet another mold made, enabling me to create copies, before I could finally finish off the octopus. The result is grand and gorgeous with its ocean blue diamond eyes (which hide a bit and glitter menacingly at the unsuspecting viewer) and white freshwater pearls.

Very early on in my work I had a distinct Cthulhu vibe coming off from this piece. This Kraken was not meant to be a natural beast, but my take on a mythical sea monster and so it actually got a face resembling the one of Cthulhu – a gigantic god-like monster from the universe of Arkham Horror, originally described by H.P. Lovecraft in his short story “Call of Cthulhu”. Lovecraft only wrote a few stories in the 1920’s, but the universe has inspired nerds and geeks worldwide ever since and through fan art both in fiction and pictures as well as a whole host of games, the dark and (literally) maddening universe has become… well, sort of mainstream. At least amongst geeks, which seem to be much more plentiful now than when I was a teen and young(er).

However, most non-geeks will not know who Cthulhu is – or even attempt to pronounce the name - and so I broadened to the more mainstream monster of the KRAKEN seen in blockbusters such as Pirates of the Caribbean or Clash of the Titans (“Release the Kraken!”).

That particular name is originally found amongst the collection of myths in Norway, while the German name for an octopus is “Krake”. In other words: A name which was much more accessible and relatable to the many.

You can see the original and very first KRAKEN, together with pieces by 39 other talented jewellers, at the museum Fjord & Bælt in Kerteminde in Denmark until December 2020. It IS for sale, but for obvious reasons you can’t pick it up before the exhibition is taken down. However, if you would like a copy, perhaps with your own twist such as differently coloured eyes, other drops hanging from the chains or no oxidization, fell free to contact me at design@castens.com or phone +45 32 200 444

See pictures close up and purchase your KRAKEN here:

Take me to the KRAKEN