Wedding sets are a well-known concept in the US, where the big diamond engagement ring is paired with a smaller wedding ring, which fits up against the latter. A smart solution in order to have more space for rings on the other fingers. However, the wedding ring tends to turn autonomously around the finger even though it has often been designed to follow the specific shape of the engagement ring - to much irritation of the wearer. Solution: Interlink the two rings together like a hook and loop

My wedding award winning set consists of a solitaire – The “Hiding Heart” - and a wedding ring – the “Hooked on You”. The latter is designed with a 3-dimensional curve, meant to slip over and around the setting of the engagement ring, thus anchoring the wedding ring in place. Engagement- and wedding rings see an enormous amount of wear and tear, since they are being worn every day, preferably for the rest of the owners life. Therefore, these particular rings ideally have to be able to withstand time and use gracefully, hopefully becoming an heirloom for future generations. This fact was vital when I set out to design my wedding set.

Claws versus closed – the background of the design choices: “Look how much he loves me” the diamond size of the engagement ring traditionally says. Usually such a diamond is held in place with prongs or claws: Rather delicate, small pieces of metal, which tend to be scratchy at close contact, wear down over the years and eventually might risk letting go of the precious gem. The diamond in a claw setting is exposed to blows between the claws, risking the edge (also known as the girdle) to be chipped off. BUT the claws have one major upside: They allow the maximum amount of light to flow through the gem, letting it appear as bright and brilliant as possible. 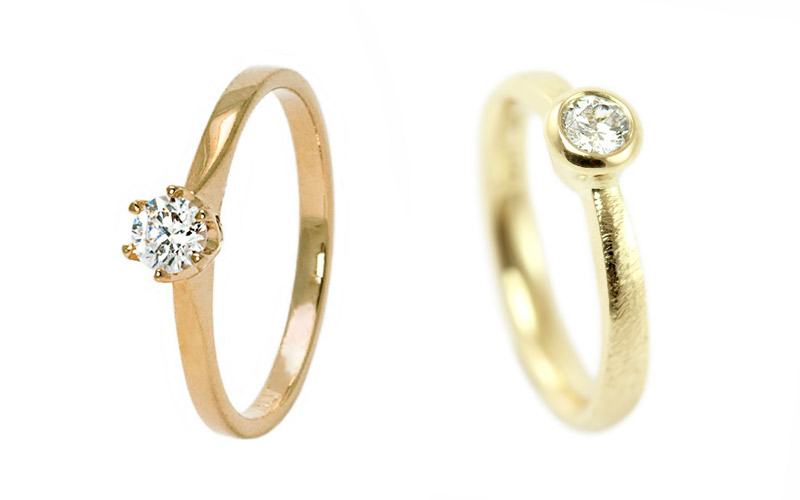 A closed setting, which encircles the gem, is a much safer option, protecting the delicate girdle from blows, while being a lot more comfortable for the wearer and especially her surroundings as well as durable. As an added bonus, the diamond optically appears larger than it is. BUT the closed setting does not allow light to enter from the sides. Usually not a problem for a white diamond, since a well cut gem will reflect the light back at the viewer, while a colored gem set in a closed setting might seem darker than it is. In short:

The Hiding Heart solitaire – combining the best of two designs

When designing the setting for my solitaire, I wanted to keep the top brim of the closed setting with all its advantages, while somehow allowing light to flow through the gem from the sides. This was obtained by cutouts on said sides, effectively creating a basket setting, which holds the gem safely in place while letting light flow through the holes. Since this ring is meant as an engagement ring, it was an obvious choice to choose a heart shape for the cutouts. The fact that these hearts are placed on the sides of the setting also removes some of the tackiness, which might be associated to jewelry with a heart motif. 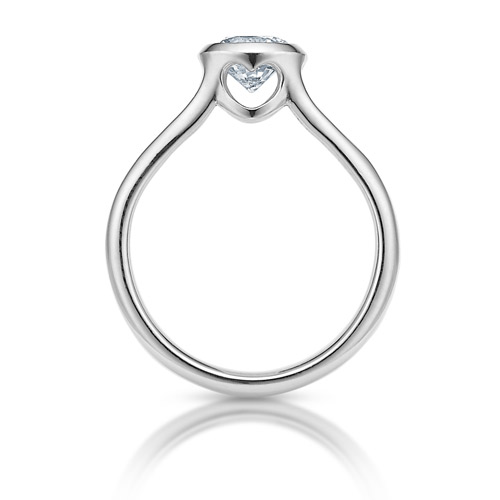 The ring as a whole is shaped as one harmonious entirety, where each part effortlessly flows into the other, creating arches and air as well as a sturdy and reliable base. The bottom of the ring has, as opposed to most solitaire design, a substantially wider profile than the delicate top, providing balance to the design when off the finger as well as added comfort when wearing it.

A word on the design style

The look of the important engagement and wedding rings which will be worn every day, tends to be somewhat conservative. Choosing something “classical” which is expected to last longer taste-wise than something extravagant, is common, which is also why the white diamond is such a popular choice. I chose to cater for this tendency by creating a design, which on a first glace has a very classical look to it, but seen from another angle reveals a small secret: the cut out heart and a non-traditional way of connecting the ring shank to the setting. This sublte shift sets the ring apart from the classical, above mentioned claw setting. An understated challenge of “how things ought to be done” which many can happily wear while still getting the feel of carrying something unique.

Each Hiding Heart is specially adapted to its future owner. We create these rings in 18k yellow gold and 14k white gold for diamonds of an approx. diameter of 4, 5 and 6 mm. These diamonds are as unique as we humans and are located in Antwerp before we eventually set them in the finished ring. Of course, we are also open to custom orders, such as this version made of rose gold with a 2 carat diamond!

Hooked on You – Making staying in place part of the design

The simplest solutions are often the most elegant ones and this wedding ring is no exception. Designed to be combined with the Hiding Heart solitaire, Hooked on You - with its somewhat oval shape - makes no sense on its own. However, when living up to its name, the precisely curved ring effortlessly stays in place, while proving extra interest to the main gem of the ensemble. 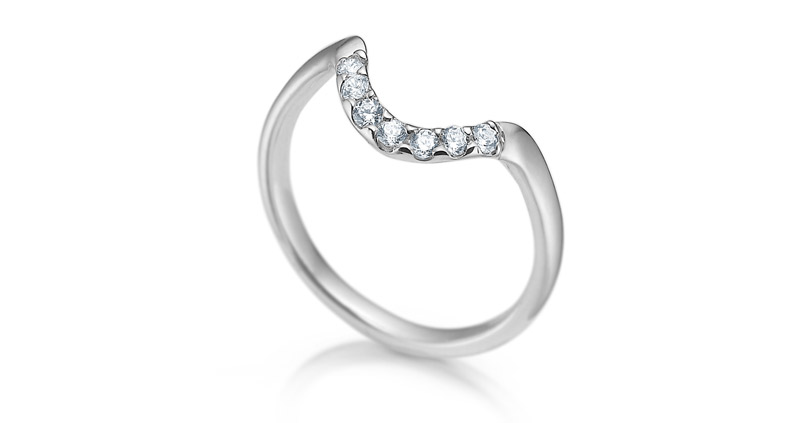 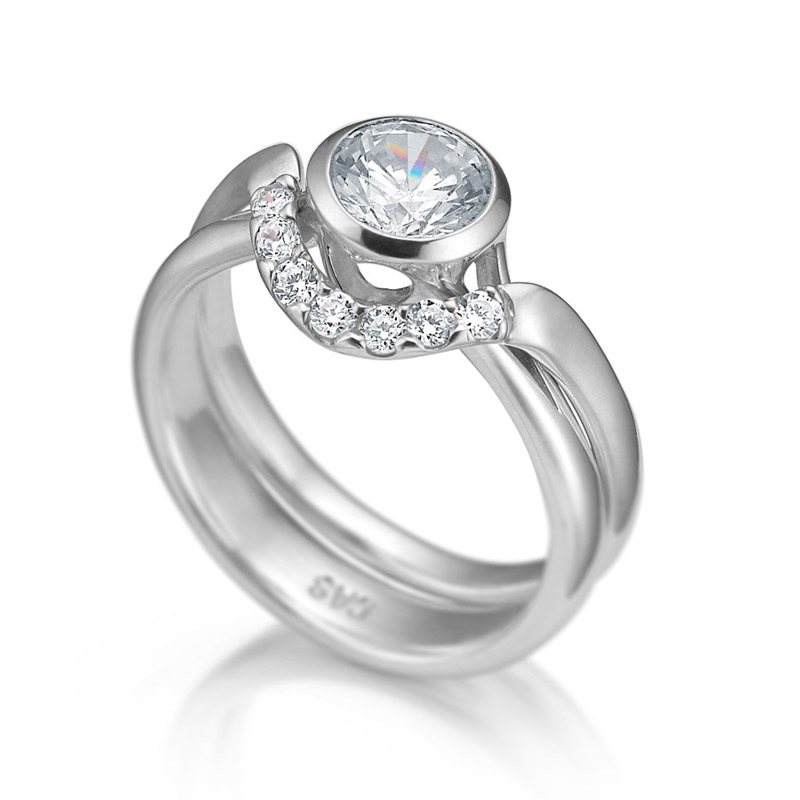 I have designed the Hooked on you in two versions: A slender, rounded one, which mirrors the soft lines of the solitaire, and a somewhat broader version, which is destined for small diamonds to be set. The couple can choose to start off with none or just a few gems and then add to the row as life calls for celebrations. The wide Hooked on You ring can hold up to 17 diamonds. 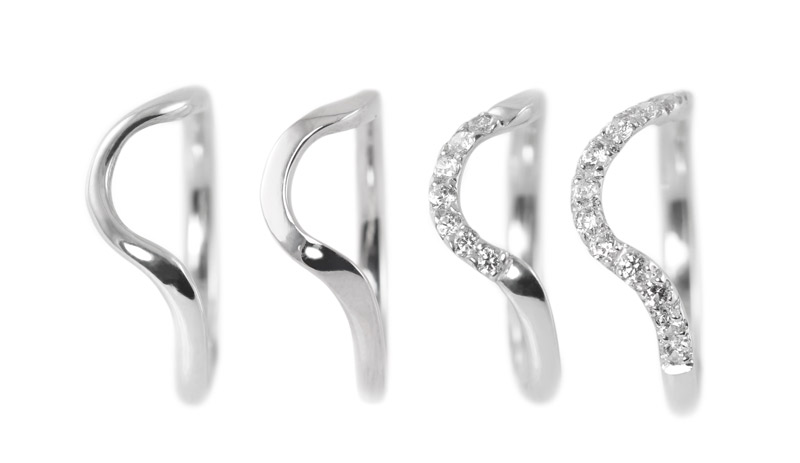 These diamonds are set with extra sturdy prongs, which do leave up to 1 millimeter girdle of the individual gem exposed to blows, thereby posing a theoretical risk of damage. However, based on a cost/benefit calculation, which revealed that it would be absolutely affordable to replace a broken gem in the very unlikely event of one of them breaking, we chose to work with this setting design after all. The reason for taking this calculated risk is, that small diamonds, set as protected than the main gem of the Hiding Heart, would be overpowered by the amount of metal necessary to do so, reducing the simplicity of the band. In other words: an aesthetic choice.

How the design came into existance

Almost 2 years in the making, this wedding set has been through many phases, though “beauty, comfort and durability” was the goal all along. The initial drawings reveal the basic idea of a hidden heart on the side of the setting, but the overall shape is still clumsy and visually clearly divided into a setting and a ring shank. 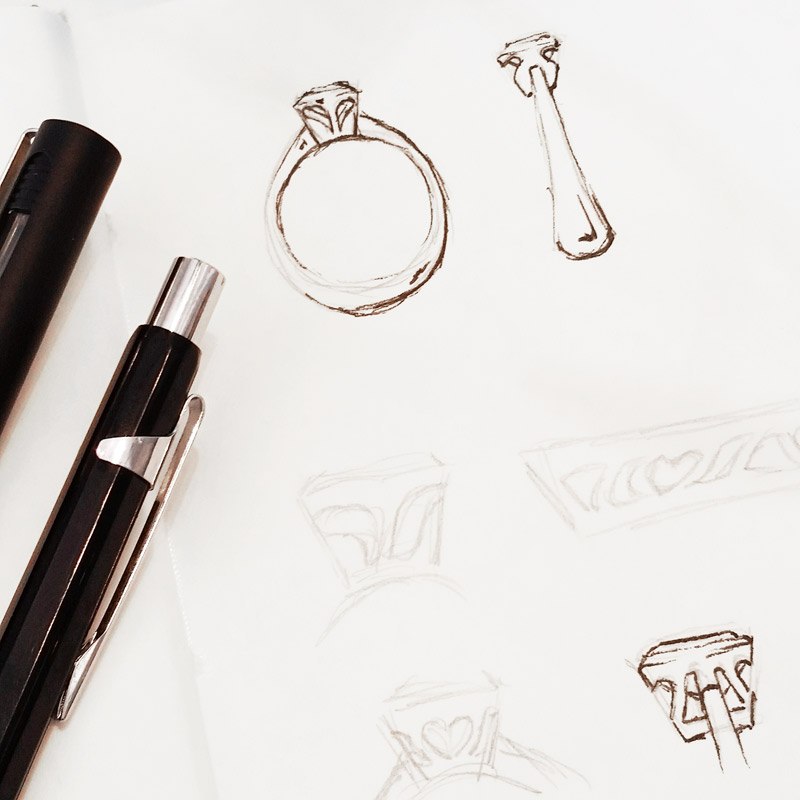 Many sketches by hand later, 3D drawings eventually enabled me to see the design more precisely. 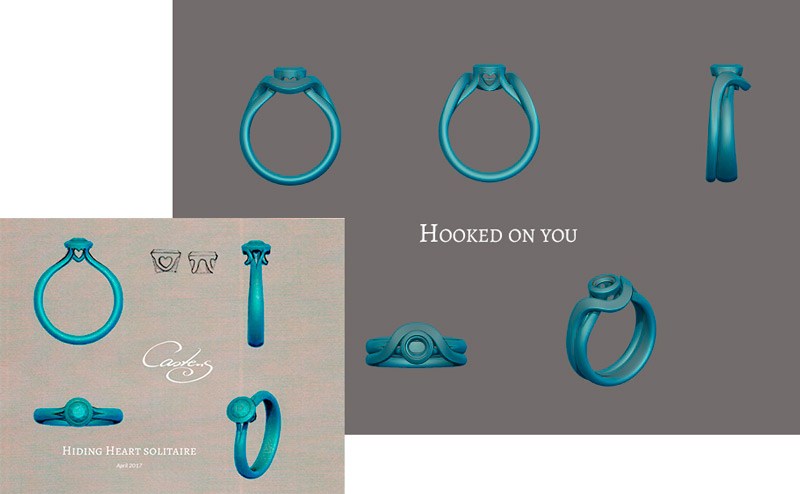 When the 3D drawings were satisfactory, several test prints were necessary, before I deemed the design good enough for actual casting. 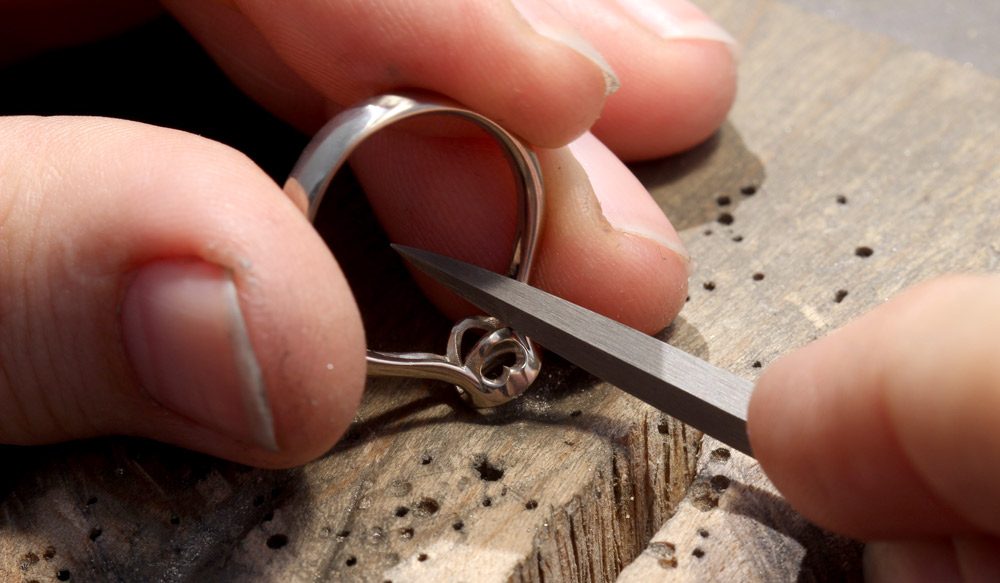 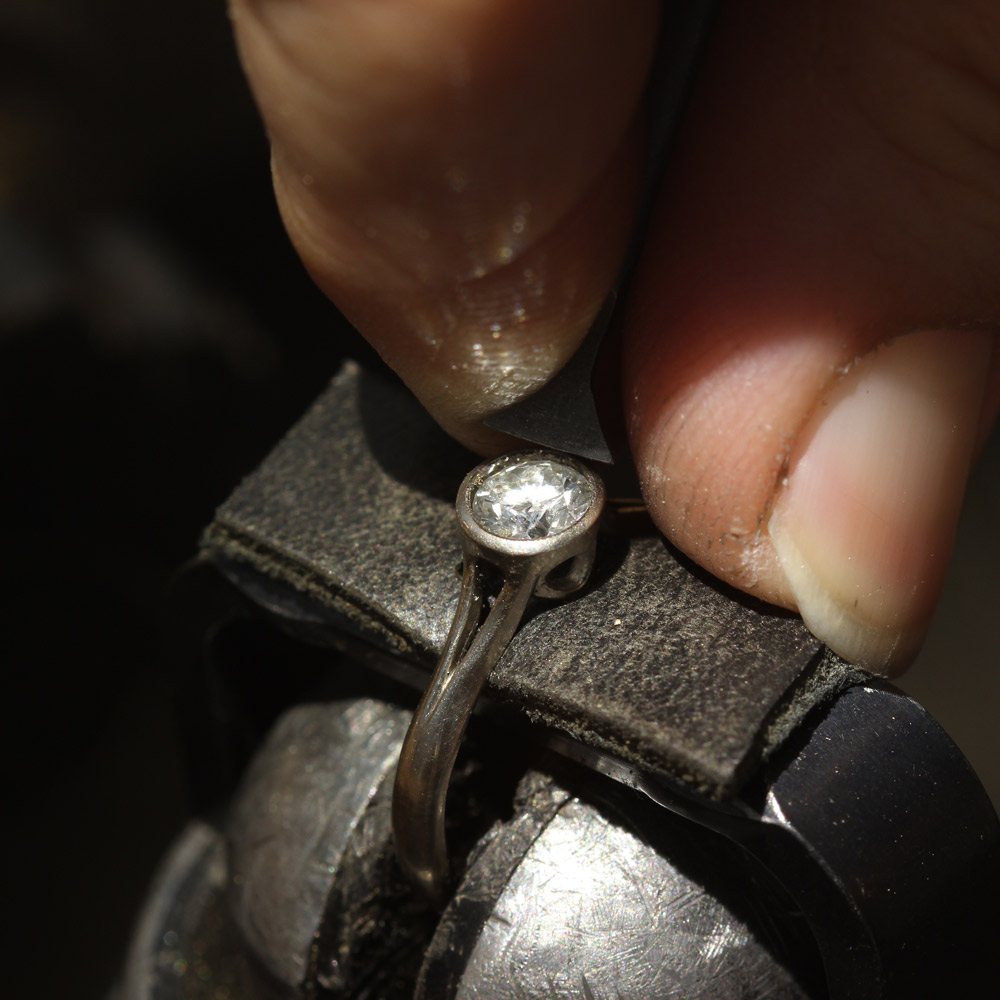 The 3D printing technique was also vital in order to make the Hooked on You fit as snugly as possible onto the Hiding Heart ring before being cast and we could start testing different ways of setting the diamonds. Various setting techniques were tested before we settled on a row of extra sturdy prongs which would protect the small diamonds as well as possible for such an airy setting technique. 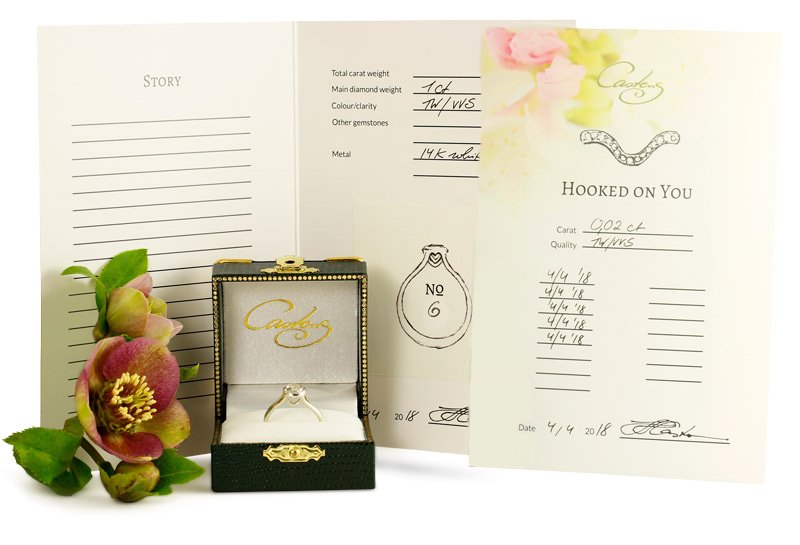 Individually numbered - there can be only one!

Each Hiding Heart is specially adapted to its future owner. We create these rings in silver, gold and white gold for diamonds of an approx. diameter of 4, 5 and 6 mm. These diamonds are as unique as we humans and are located in Antwerp before we eventually set them in the finished ring. Of course, we are also open to custom orders, such as this version of rose gold with a 2 carat diamond! Each ring is stamped with its own number and we keep an exact ledger of who has purchased which ring. Therefore, the new owner of the ring also receives a certificate stating the individual ringer of that exact ring.

How much is it?

This wedding set is so unique, it convinced a large jury at the A'Design Award to grant it a gold medal! 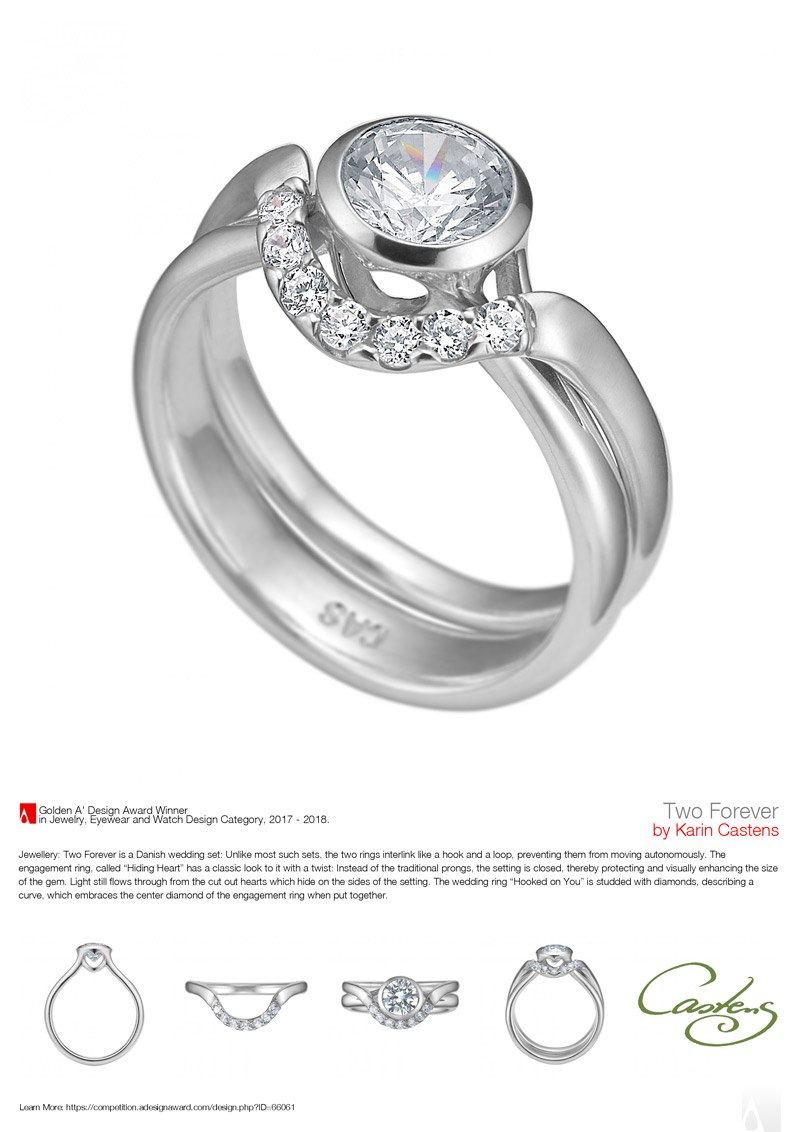 The design of the wedding set was meant to be beautiful, comfortable and romantic, while being practical enough for living an everyday life - and it does just that.