Every emerald has a unique personality

Don’t you just love emerald green? Emeralds are incredibly beautiful – non the least because of their enchanting colour and the charming ”jardin” (French for garden): The many visible inclusions, which lend character to the gem.

The inclusions are the detail which makes every emerald unique, but it IS possible to find eye clean gems. However, these emeralds are a rarity and hence hard to come by and of cause very, VERY precious! Even the large, intensely green emeralds which are found amongst royal jewels usually have visible inclusions. 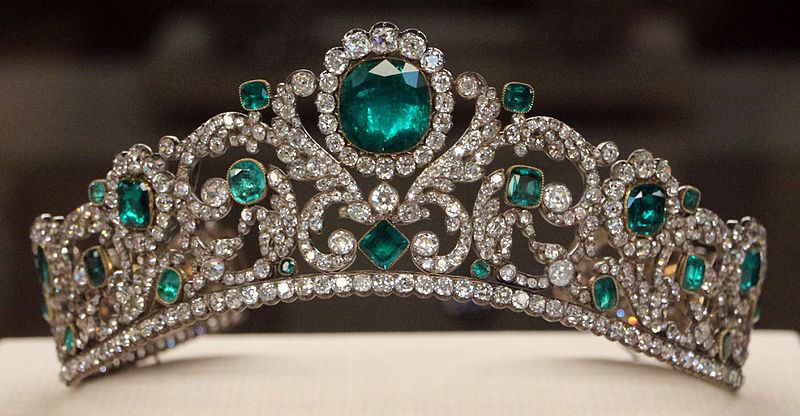 However, we have learned to love these inclusions because the colour is wonderful; from a delicious mint green to me most intense vibrant green – emeralds are candy for the eyes! AND there is an added bonus to the jardin: Because every emerald has its own, unique character, a good close up photo of the gem can help identifying it also after it has been removed from its setting (if for instance the piece of jewellery has been stolen and taken apart). In other words: the equivalent of a fingerprint!

Did you know:
Emeralds are 20 times as rare
as diamonds!

The inclusions are found inside the gem and they often also break the surface, which results in a gem which doesn’t appear highly polished when studied up close. However, since the colour is the most treasured feature of the emerald, you rarely notice this when looking at the piece of jewellery s such. But viewed from the “right” angle and light, you will be able to see lines etc. marring the surface of most emeralds. Almost all emeralds are treated with colourless oil in order to mute the appearance of these lines. Therefore, cleaning a piece of emerald jewellery in an ultrasonic is NOT recommended and also (of cause) do not soak your piece of jewellery in dishwashing detergent because the oil might vanish and the lines hence appear more visible. Gems of an inferior quality are often treated with epoxy in order to fill out the cracks and stabilize the emerald – a somewhat complicated process involving heat and pressure. 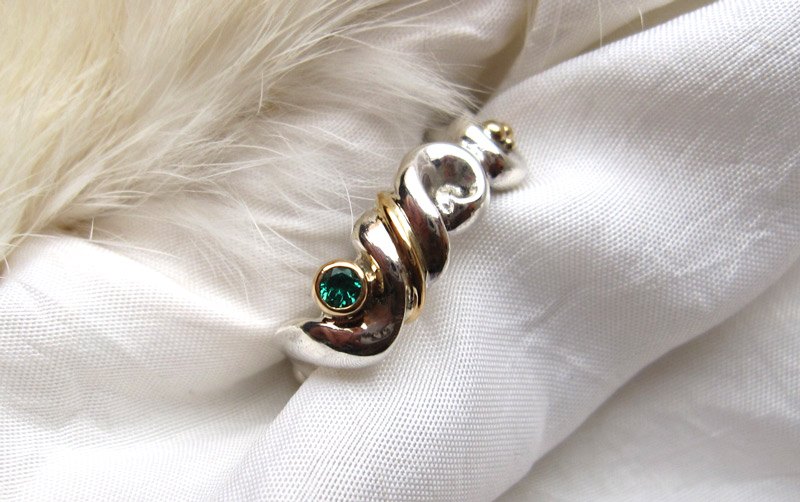 Wave ring of white and yellow gold with a synthetic emerald

If you want an emerald with a highly polished surface without sacrificing your firstborn, you will find a viable alternative in the lab created emeralds – or “synthetic emeralds” as we call them in the business. These gems often have a lot fewer inclusions than their natural counterparts. You could argue that the synthetic emeralds are a better choice for environmental reasons, but this discussion is a lot more complicated than that. Read about the issue in this article.

Don’t choose an emerald for the engagement ring

Emeralds are not sutited for the "important everyday rigs" such as engagement- and wedding rings. Because in spite of emeralds being reasonably hard (on Mohs scale it ranges on 7,5 – 8. See a video about this here), its characteristics with the inclusions makes it somewhat brittle and hence even a relatively light blow can break it. So don’t propose with an emerald ring: The symbolism of the gem being damaged even before the actual wedding day is just too heart breaking! If you would like a green gem in an engagement ring, consider instead a green sapphire or diamond. 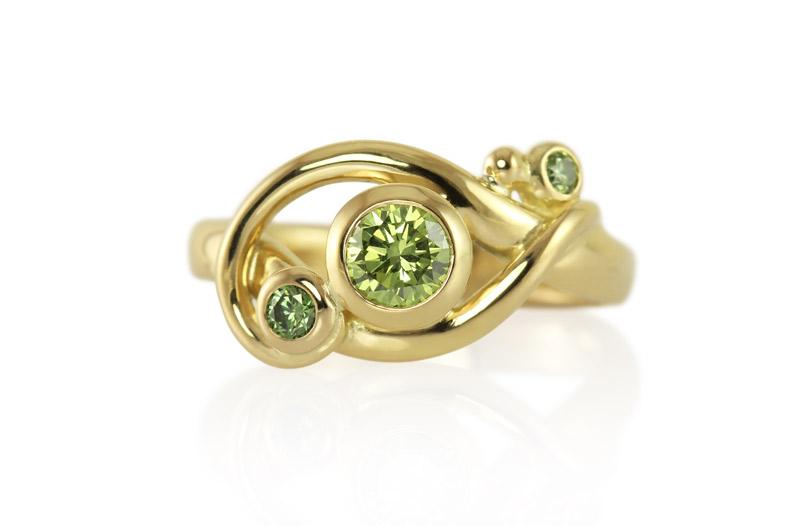 The characteristic brittleness of emeralds makes them somewhat infamous in the business and many jewellers refuse to work with them - and if they do, they will need ABSOLUT undisturbed piece an quiet when setting them. At Castens we DO work with emeralds, but not square or pear shaped gems with pointed corners which might break off during the delicate setting process.

The wonderful emeralds are for the above reasons perfect gems for necklaces and earrings (and tiaras of cause ;-) ). Who doesn’t remember the iconic pictures of Angelina Jolie at the Oscars 2009 wearing breath taking emerald drop earrings? These gems (a total of 115 carats) were exceptionally large, strongly coloured and reasonably eye clean which is why the earrings cost the neat sum of 2,5$! 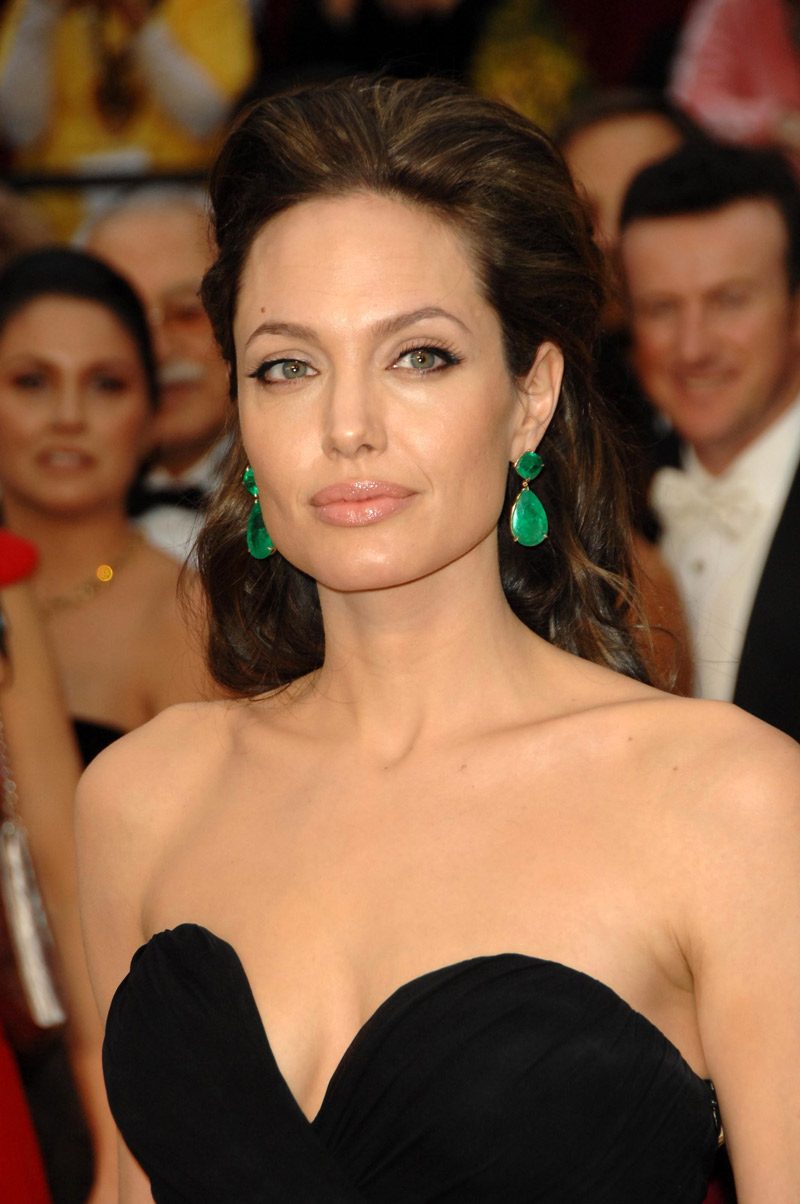 Substantially smaller gems of cause come at a very much smaller price, but it is still very hard to find them of a prime quality where both colour and clarity are at their best. This is due to a rather frustrating fact which one of my suppliers dryly noted: Once the big guys like Cartier and Graff have had their pick, the rest of us have to make do with the leftovers. This actually goes for all rare gems. 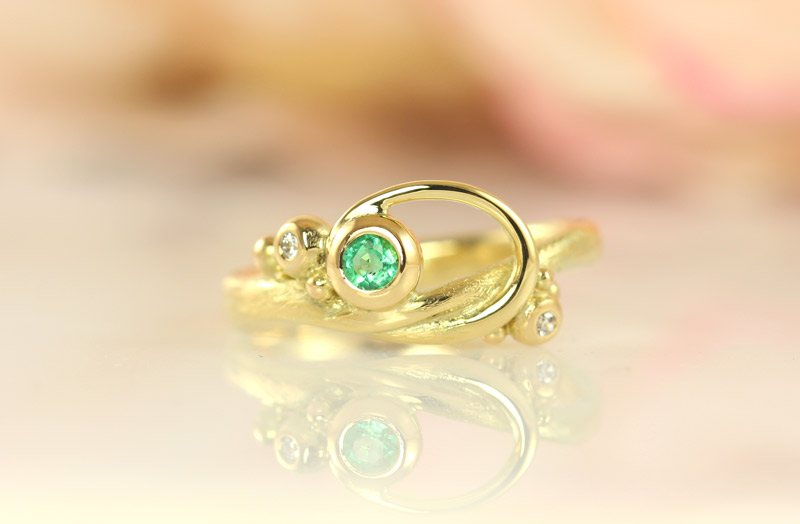 No rule without an exception: Even though we generally avoid setting emeralds in rings, we currently have this gold ring featuring a small emerald in our vitrines. And is IS a pretty ring for sure!

The delicateness of emeralds doesn’t rule out rings entirely: A sumptuous cocktail ring meant for festive occasions is wonderful or you could consider smaller emeralds set as “cheerleaders” as we call them around a larger focal gem. 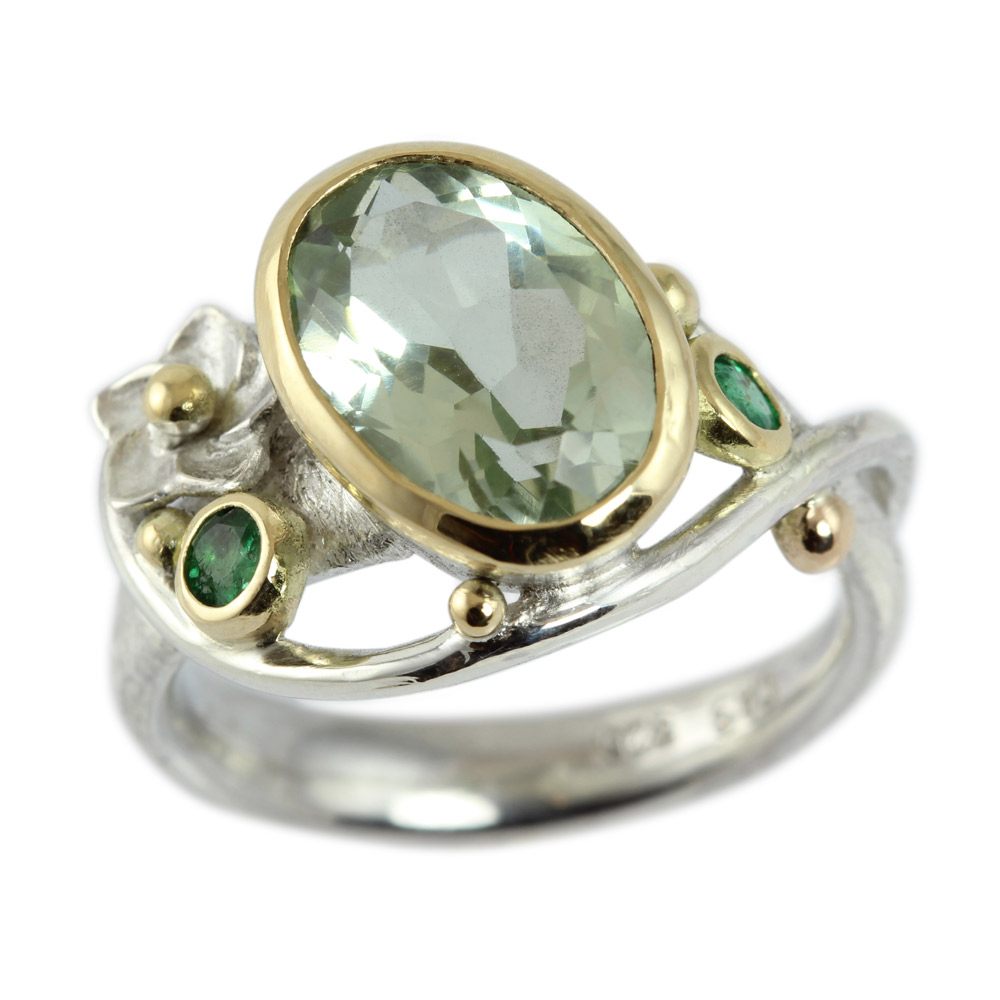 The small emeralds here stem from the grandparents of my customer and used to be placed in an earring. When she inherited it she decided to revive them by having them placed in a ring instead, flanking a light green prasiolite, also often referred to as a green amethyst.

Right now this absolute beauty rests in our safe – an old cut oval or cushion shaped diamond. And what…

Which gem is the most durable?

An engagement or wedding ring is something very special: These rings are about love, commitment and persistence and the rings…

Why do so many Danes insist on calling yellow gold red gold (rødguld)? It doesn’t make any sense since gold…