High stucco ceilings, chiming laughter, clinging glasses and glittering diamonds. Yes… participating at the Show of the Guilds at the prestigious Moltkes Mansion, the closest we get to real coture here in Denmark, is quite something. The difference being, that this isn’t a singular fashion house showing its latest designs, but representatives of a number of guilds, which have teamed up with the tailors guild. Apart from the tailors, the show features jewelers, furriers, saddle makers (no, they didn’t show saddles, but handcrafted leather bags) and milliners. Due to the high end nature of all these products the clientele was also in the high end, none the least HRH Princess Benedicte, who is the patroness of the show. 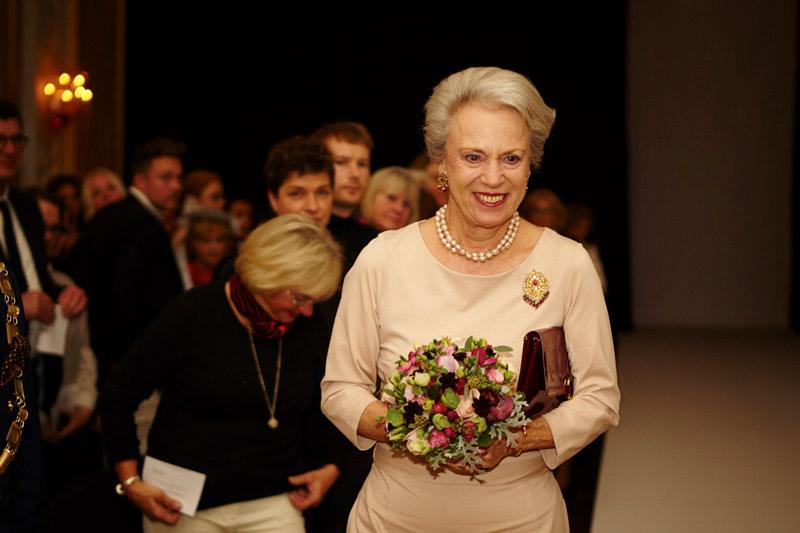 Other guests were besieged by the paparazzi too, for instance: 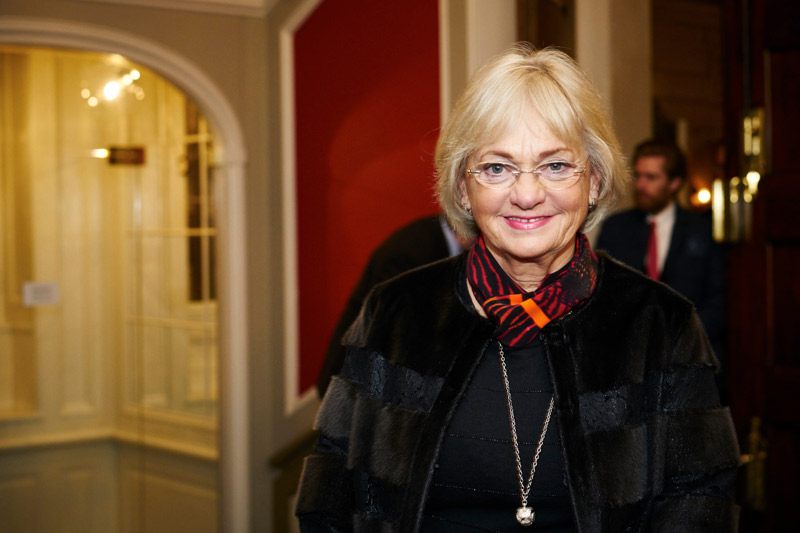 Chairman of the Parliament, Pia Kjærsgård 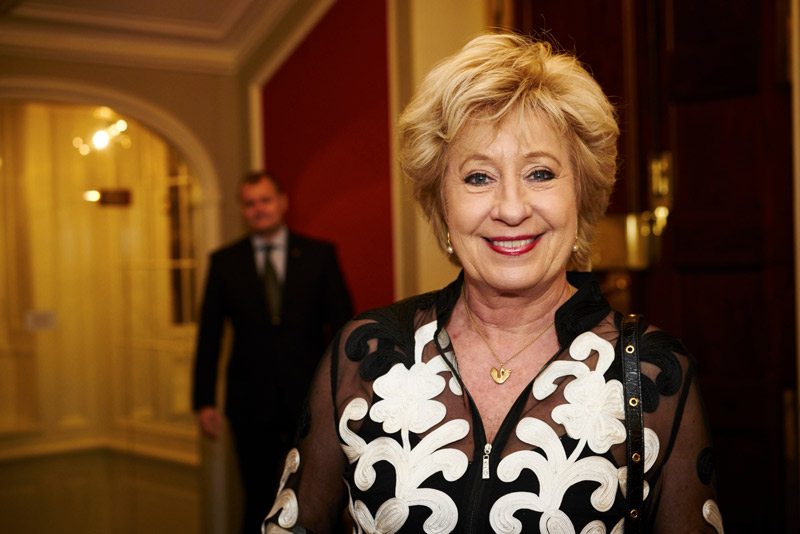 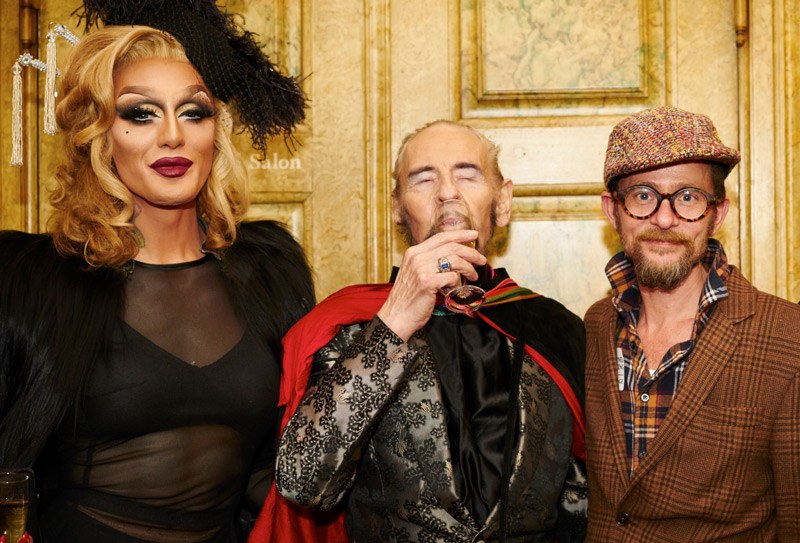 The Moltkes Manion is such a beautiful building for this kind of event! The mansion was originally built in 1702 and has since been expanded and redecorated substantially. Through the centuries is has been the genteel abode of nobility, counts, big traders, a dowager, a prime minister and other gentlemen and –woman from the better part of society.

In 1930 it was bought by the Artisan Association and was yet again redecorated and expanded in order to show off its new owners. This is especially visible in the new ballroom, which was created in a baroque/rococo style with a lightly domed ceiling and stucco designed by the sculptors Thomas Hansen and Edvard Eriksen, who also created the Little Mermaid. This work of art depicts amongst other things the tools of the various trades represented here: Amongst flowers and leaves, you will find anvils, compasses, hammers, scissors etc. It’s great fun to explore this work of art and guess which guild might be depicted.

Of cause the music and the creations which walked up and down the catwalk on that day in this spectacular room was a lot more contemporary!

My collection at the show

My design created for the show was actually inspired by the history of this grand building: In spite of finding architectonic and artistic elements from basically any period since this vast building was founded in the baroque period (imagine large powdered wigs and heavy, dark and very decorated velvet dresses) , I find it to be permeated by the somewhat lighter, more cheerful rococo style. Here you will find the delicate, asymmetrical stucco and mirrors while the colours primarily keep to the pastel range. In that spirit, my collection presented to the princess et al was called “Rocaille” – a design element, which keeps popping up all over the rococo era and which has also lent itself to the name of the period. Read more about my fascination of this style in this article 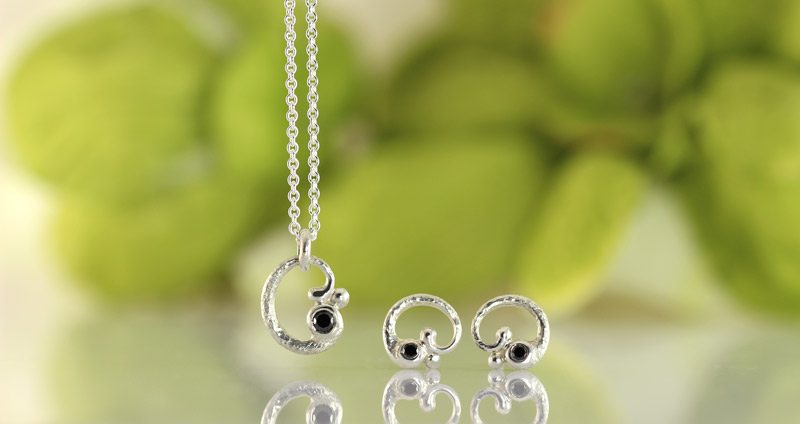 The everyday version of the Rocaille series - small and delicate scrolls as ear studs and a dainty pendant. Will soon be avaliable in the upcomming webshop!

ROCAILLE has basically been built of the same element in two different sizes. Here is a simple pendant meant for everyday use, which I so far have created in 18 yellow gold set with a white diamond and silver set with a black diamond. Classical choices so far and I think this design could go well in a number of other material and colour combinations, which I am sure my customers will do – they are generally quite good at challenging me with how my design can be personalized.

AND… then there of cause also were the large showpieces. Literally, since a piece of jewellery needs a certain size to be noticed at all, when being worn down a catwalk by a skinny model in front of hundreds of onlookers. My showpieces (two necklaces and a set of chandelier earrings) were built of a number of rocailles, as the small scrolls are called. It actually took quite a while to settle on an exact design and I kept on shuffling these pieces around and make numerous drawings until I took a deep breath and decided - and started soldering. 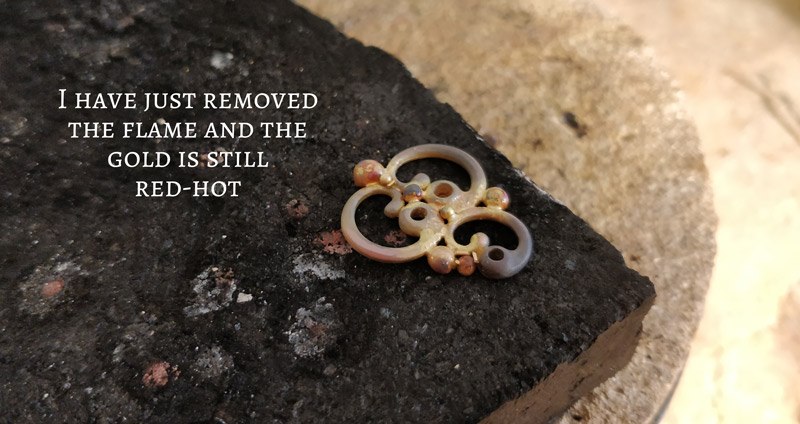 After the elements has been joined and decorated with the small bubbles, which, like the curls, are sort of a Castens trademark, it was time to add the coarse contrast, which would provide a contemporary feel to this somewhat historic design. This is done with a small ball-shaped burr, which is carefully and precisely run over the surface of the lines of the piece. To me it is important to break the surface while leaving the details – bubbles, settings and eyelets – polished and smooth.  Eventually the diamonds were set and the exquisite pearls, which I have hoarded in my safe for years, waiting for something spectacular enough to be created were added to the finished pieces. 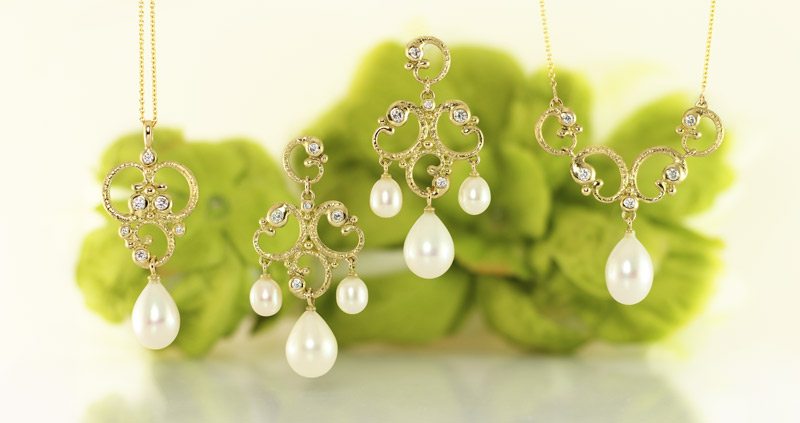 Back to the show – here they are: My models with my jewellery!

First the Celebration tiara, the double drop-shaped earrings inspired by the earrings which HRH Crown Princess Mary wore at her wedding and the absolutely gorgeous Primavera cocktail ring. 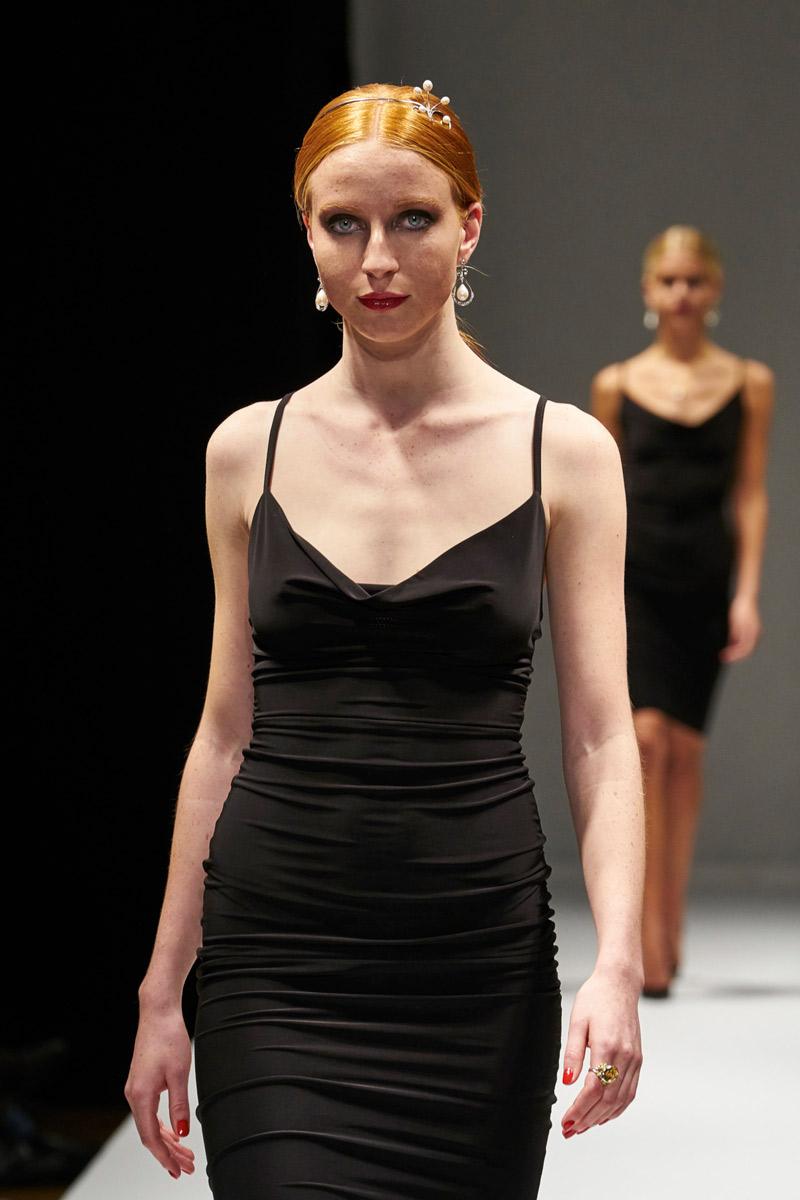 Then came the Rocaille series – the small collier, the chandelier earrings and another ring, which is not part of the series, but fit the ensemble well: A large ring made of 18k gold, holding a lovely baroque pearl and some diamonds. No Rocaille curls, but it still fit the bill rather well I think. Now you might ask: “But is there no Rocaille ring?” Well… I DID have plans to create one, perhaps you noticed it on the drawings, but unfortunately I ran out of time. But it will certainly be created – that’s a promise! 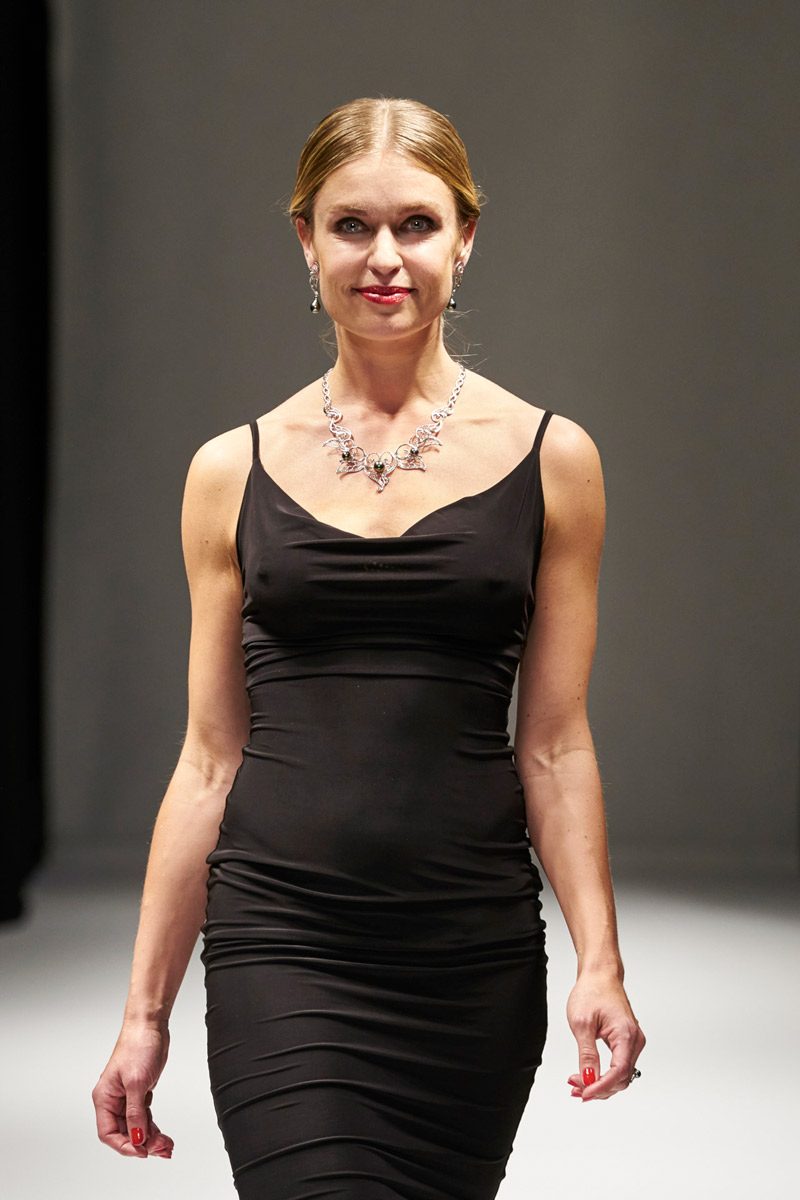 The last model wore the Adorabella series. This was the second time that collection made an appearance at the Show of the Guilds, but it just fits the surroundings so beautifully. However this time around, the convertible tiara was shown in its collier version, which of cause is the clou of this tiara: You can wear it in your locks at a royal ball and around your neck at a grand premiere some other day. Just to illustrate, this is how the collier looks when worn as a tiara: 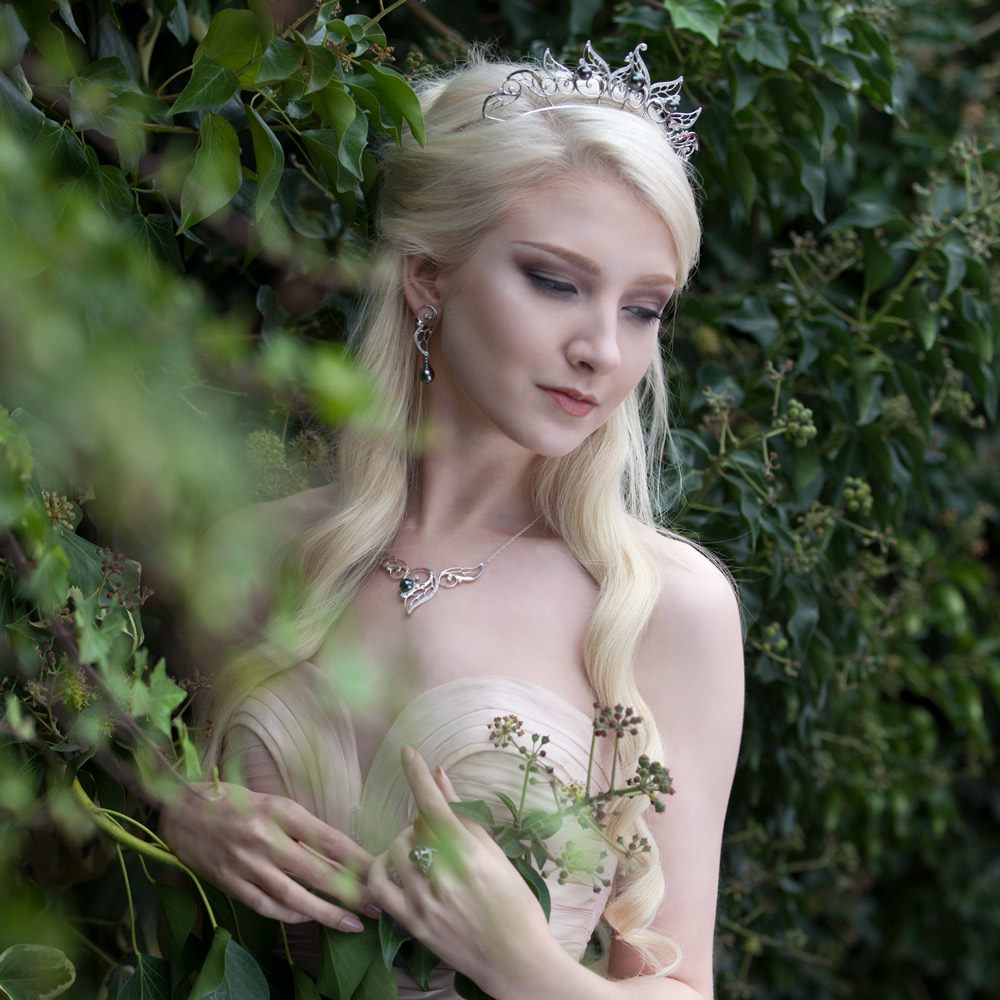 Together with the collier my model wore the long pave set earrings and the pearl ring. The Adorabella series comes in white gold like these pieces and in silver with substantially fewer diamonds. But at the Moltkes Mansion we of cause showed the larger pieces. I am btw. I am considering to create a version in yellow gold with white pearls – and perhaps also a number of brooches. Let’s see when I find a good occasion to experiment… 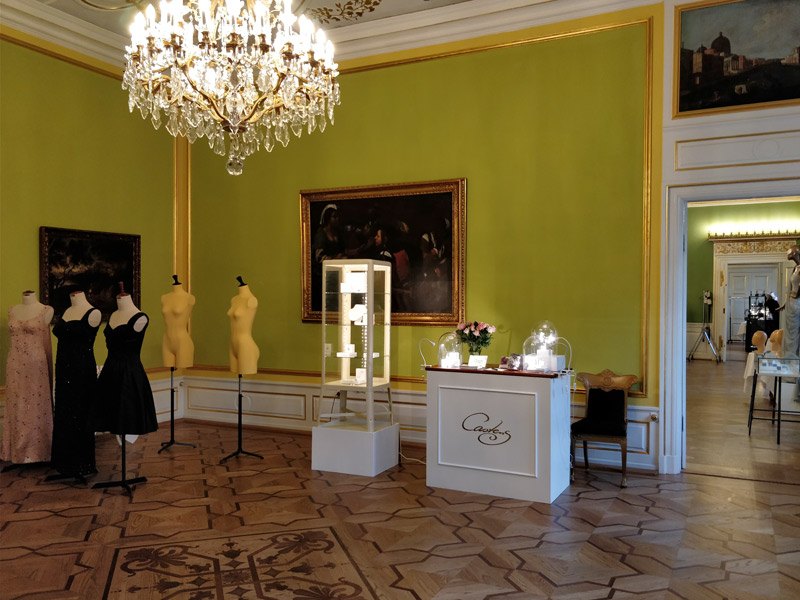 After the show, the guests, unlike other fashion shows, have the opportunity to see what they have just been shown on the catwalk up close in the adjoining salons. Here we were – all the designers - with each our vitrines, dress forms and pedestals, showing off our individual creations from its bets angle. Tis was also when we had a chance to tell our guests about what laid behind the designs, which is always such a pleasure! Our guests were very taken by the Adorabella collier, the Primavera ring, the Hiding Heart concept and none the least the Rocaille jewellery. I nearly had to part with the chandelier earrings at the show itself and have to report, that they by now have left my shop with a new, happy owner. But rest assured: I will surely create something like them again!

After such a long day we were very tired – myself and my trusted crew, consisting of my lovely apprentice Sofie and my wonderful admin Anne-Marie. But… com January we will haul the vitrines out of the basement again and do it all over at the bridal fair in Forum, Copenhagen!

The high end secret: Show of the guilds

A few months ago, we participated in a design contest with our Two Forever wedding set. We are very proud…